Jimmy Ryan is an American artist, composer, producer, arranger, and author.  His career has spanned sixty-three years and is still going strong, having recently performed at the Rock & Roll Hall of Fame, 2022 Induction Ceremony with triple Grammy winner, Olivia Rodrigo to inaugurate his long-time friend and former bandmate, Carly Simon.

When he was nineteen, his college band, The Critters had their first top forty hit, “Younger Girl” and in the next few years landed three charting albums and two more top forty hits, “Mr. Dieingly Sad” and “Don’t Let The Rain Fall Down on Me.”  One of the highlights of their career was touring with Dick Clark’s popular ABC TV series, Where The Action Is, sharing the stage with The Dave Clark Five, Herman’s Hermits, The Kinks, Paul Revere and the Raiders, and The Young Rascals.  Unfortunately, The Critters were popular during the Viet Nam War, and the armed services called in three of the founding members, eviscerating the band’s foundation including lead singer, Don Ciccone and ultimately dooming the band.

Jimmy was not about to let his career end with the demise of The Critters; within a few months, in the spring of 1968 he signed on as bassist for The Crazy World of Arthur Brown, touring on Arthur’s #1 hit “Fire.” Jimmy was twenty-two at the time.  At the end of the summer of 1968, Jimmy and Arthur Brown’s keyboardist, Paul Glanz (who had toured with The Critters, Roy Buchannan & Meatloaf) teamed up with now-famous drummer, Andy Newmark (who toured and recorded with Eric Clapton, Roxy Music, Sly & The Family Stone and many others) to form a band called Ivory.  Their band, an organ/bass/drums trio that predated ELP was short-lived because Jimmy’s friend, Carly Simon called him to put a band together for her.  She was breaking fast on the US and British top 40 with “That’s The Way I’ve Always Heard It Should Be,” as well as her first album “Carly Simon,” on which Jimmy played guitar. On Jimmy’s coaxing, Ivory – Jimmy Ryan, Paul Glanz & Andy Newmark became the touring and future recording band for Carly. The band played on the entire Anticipation album, produced by Paul Samwell Smith of Cat Stevens and The Yardbirds fame, and Jimmy went on to work on most of Carly’s future albums and continues to work with her to this day.  Jimmy is featured in the 2018, BBC Special “Classic Albums – Carly Simon: No Secrets.”  He was the guitar soloist on almost all of Carly’s hits, the most memorable being “You’re So Vain,” and the Academy Award-winning song of the year from the movie, Working Girl, “Let The River Run.”  Jimmy also appeared in the video of the song. He performed in two HBO specials with Carly, Live From Martha’s Vineyard, and My Romance, as well as playing on the studio recording of the My Romance CD with the legendary conductor and arranger, Marty Paich (father of David Paich of Toto fame).

Moving from London back to NYC in the late 70s, Jimmy, along with Andy Goldmark (writer/producer of Jennifer Paige’s “Crush” and many others) and Holly Sherwood (backup singer for Jim Steinman’s many hits with Bonnie Tyler, Barbara Streisand, and Air Supply) formed a band called Wondergap and were signed to A&M Records.  They connected to A&M through the world-renowned producer, John Anthony who collaborated with them on their album for A&M.  John, a Brit, made his name producing/signing artists like Queen, Genesis, Yes, Al Stewart, Roxy Music, Ace, and The Tubes.  When Wondergap’s A&M deal failed to produce a hit, Andy and Jimmy dissolved Wondergap and signed a two-year deal as staff writers for Atlantic Records’ publishing company, Walden Music.  During that time, their songs were covered by rock/pop artists, The Association, Irene Cara and Mickey Thomas (lead singer for Jefferson Starship/Elvin Bishop), as well as for pop/country artist, Michael Johnson.

During the times when he wasn’t recording or touring with Carly Simon, nor recording and living in England, Jimmy developed a career scoring music for TV, forming a music production company, Rampage Music New York. During his Rampage years, he created the theme for NBC News which ran originally in NY, then was adopted nationwide from 2003 to 2009 on many of the local NBC owned and operated stations. The main theme and background music was recorded live in Salt Lake City with the Utah Symphony.  In 2005, he wrote the themes and background music for all of the CNBC financial shows that aired from 6 AM to 6 PM, weekdays, on six continents worldwide, many of which are still running to this day.  When MSNBC was ready to launch in July 1996, Jimmy was called in to score the nationwide launch campaign.

When not writing news themes, Jimmy wrote music for The Discovery Channel, Lifetime, USA Network, and PBS scoring the Nova movie of the year, The Pluto Files – with Neil deGrasse Tyson. In collaboration with the History Channel, he composed music for major exhibitions at the Smithsonian Institution, including Deep Ocean Explorers, and Messages from the Graves, documentary music that introduces The Liberty Bell, now playing in Independence Hall, Philadelphia, and four exhibition films for the George Washington Museum in Mt. Vernon. In 2020, Jimmy composed the music for The News With Shepard Smith on CNBC. Jimmy has also composed, arranged, and produced music for over 500 radio and TV commercials for clients including Doritos, McDonald’s, IBM, Ford, Nikon, Pizza Hut, Budweiser, Chevy, Mennen, Palmolive, Hess, Hasbro, Downy, Clearasil, Arby’s, Coke, Diet Coke, Modells and more.

In 2010, Jimmy formed a band of musicians with similar credits, calling themselves The Hit Men.  Band members include Lee Shapiro, keyboards/backing vocals, former member and musical director for Frankie Valli and the Four Seasons.  Lee arranged and performed Frankie’s worldwide #1 hits “Who Loves You,” and Dec. ’63 (Oh What A Night). Russ Velazquez, keyboards, percussion, and vocals, who has recorded with Luther Vandross, Michael Bolton, Carole King, Chicago, and Sting, as well as being a four-time Emmy Nominee for his musical compositions for Sesame Street. Steve Murphy, drums & vocals who has worked with Alan Parsons, The Turtles, Jack Bruce, Todd Rundgren, Christopher Cross, and Sting. And Jeff Ganz, bassist, vocals, who has worked with Johnny Winter, Dr. John, Eddy Money, Lou Reed, Cheap Trick, and Blood Sweat & Tears.  The Hit Men spent ten years, touring the US & Canada, performing between fifty to seventy dates per year. In April 2019, the Hit Men were honored with the first-ever “Road Warrior Award” from the Nashville Musician’s Hall of Fame, “In recognition of their live performances and countless miles traveled sharing their talent and musical genius with music fans worldwide.”

Sadly, the pandemic closed all theaters and venues in 2020, and The Hit Men decided to call it quits. During the downtime caused by COVID-19, Jimmy wrote a memoir, called Behind – Autobiography of a Musical Shapeshifter, which is available worldwide at all major booksellers.  See the “Books” menu item on this site! 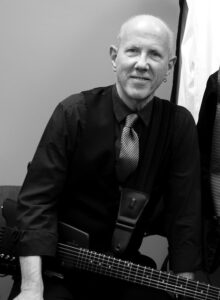